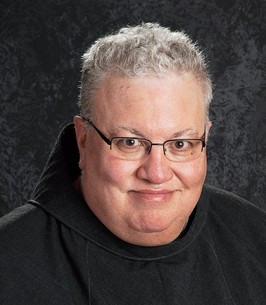 +Fr. Michael Taylor, OFM Conv. was born in Syracuse, NY on April 24. 1956, and passed away on August 29, 2021. He was predeceased by his father Albert and Jane (Krause) Taylor. In addition to his Franciscan family, he leaves his brother Bill and his wife Kris Taylor of Syracuse, NY.

Fr. Michael entered the Novitiate of the Franciscan Friars Conventual in Lake Forest, IL on August 16, 1976. He made his Simple Vows on August 14, 1977, professed his Solemn Vows on August 9, 1980, and was Ordained to the Priesthood at Assumption Church, in Syracuse, NY on July 12, 1986.

Fr. Michael’s first assignment was as Parochial Vicar at Assumption Parish from 1986 to 1987. He always desired to be in the teaching apostolate, and in 1987 he was assigned for four years to Seton Catholic Central High School, in Binghamton, NY. In 1991, he was assigned to Infant of Prague Parish in Jacksonville, NC, where he ministered for two years. Returning to the secondary school apostolate, Fr. Michael served as a teacher at La Salle Institute, in Troy, NY from 1993 to 1996.

He moved onto the Faculty of Bishop Ludden Jr. – Sr. High School, in Syracuse, NY from 1997 to 1999, after one year of serving as Chaplain at St. Joseph Hospital in Syracuse in 1996.

Fr. Michael was relentless in his desire to be a teacher, a priest, and a caring chaplain. He exhibited all these ministries in the following years (2000 to 2010)., during this time Fr. Michael returned to hospital chaplaincy at St. Joseph in Syracuse, he later served as a teacher at St. Francis High School Hamburg, NY, and then he moved onto working as a Parochial Vicar at St. Stanislaus Basilica, Chicopee, MA, St. Anthony Parish, Kingston, Ontario, Our Lady of Mercy Winston-Salem. In 2010 he returned to ministry at Assumption Parish in Syracuse.

In the last eleven years of his life, Fr. Michael bore the burden of decreased health. He was in a the very true sense of the word a wounded healer. In his ministry to the infirmed on the many pilgrimages that he made with them to Lourdes, he found both comfort and a sense of pride in his priestly ministry. When he was no longer able to reside in a friary, he was admitted to Our Lady of Mercy nursing Facility in Lackawanna, NY. He passed away on Sunday, August 29, 2021.

Interment will be at Assumption Cemetery, Syracuse, NY immediately following.

Memorial Donations may be made to the Franciscan Education Burse, 12300 Folly Quarter Road, Ellicott City, MD 21042.